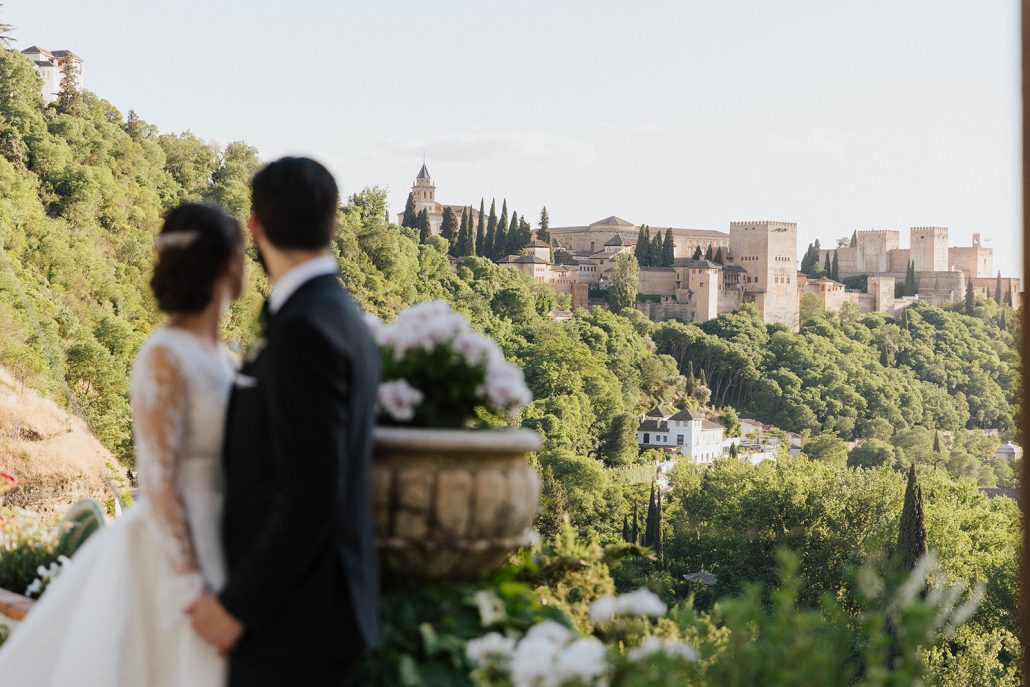 From the first conversations I had with G&D, I felt that their destination wedding in Andalusia was going to be very special and with signals to Venezuela, the bride’s homeland. But they didn’t want to leave aside the essence of southern Spain, with its music, its gastronomy, or the venue chosen for the reception.

They chose a place that told the essence of Granada and its history. But before the banquet began in this beautiful venue, G&D said “I do” in one of the most beautiful churches in Granada.

And on a big terrace with breathtaking views of the Alhambra, a romantic sunset dinner began.

Walking among the tables was like going in a garden full of flowers of different types, with bottles and glass domes that kept beauties such as vanda orchids, delphiniums or ferns… A color palette with soft and delicate tones mixed with other more vibrant ones, created a magical atmosphere in this warm afternoon at the end of May.

In the floral design as in some decorative elements, we see perfectly the signal to Gaby’s beloved land, Venezuela. Like the welcome sign, which reminded the Pico Bolivar with tropical flowers and greenery.

The bouquet was pure delicacy. Its light tones and romantic flowers completed the elegant look of the bride in a beautiful Rosa Clará dress.

After a few glasses of wine, good food, laughter and speeches, it was time for the first dance under the stars.

The Andalusian touch was given by an energetic flamenco show followed by a big party until dawn.

G&D had their dream wedding in Spain surrounded by their loved ones in an authentic venue and in a magical setting.